We can support your event with a display, talk and signings. 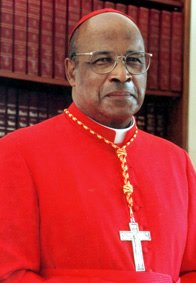 the Archbishop of Durban, has promoted Julia's book

CARDINAL Wilfrid Napier, the leader of the Catholic Church in South Africa, is also Archbishop of Durban.

Julia was delighted to hear from Tony Watkins, a friend of hers in Durban, that the cardinal had arranged for the information sheet about Sanctifying the Spirit to be reprinted.

Julia herself is a member of the New Evangelization team in her own parish and is engaged in home visits, hospital chaplaincy and other contacts every week.

It was in March this year that Cardinal Napier tendered his resignation to Pope Francis, having reached the 'retirement age' for bishops (and cardinals) of 75.

Archbishop Napier, who has been a cardinal for fifteen years, has said that once his resignation is approved, it may take two years before his replacement is announced.

When he finally retires, he plans to return to Ireland, where his journey as a priest began in the 1980s. He says he plans to 'sort out all his old photographs' and expects to be 'busier than ever' after his retirement. He may even get around to writing his memoirs.

We thank him for his kindness and his ministry and ask that you keep him in your prayers.

Thanks to Cardinal Napier, Julia's new

book has been promoted in every parish.

MEET A MENTOR AND MOTHER

JULIA BEACROFT keeps it simple when it comes to

answering questions about the

'What's prayer all about and why bother to pray?'

'I can pray anywhere so why do I need to go to church?'

'Will God really forgive me despite all my sins?' 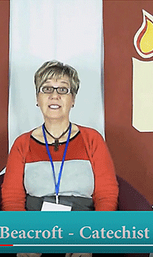 PLEASE NOTE THAT THIS WEBSITE IS BEST VIEWED ON A DESKTOP OR LAPTOP COMPUTER AND MAY NOT DISPLAY CORRECTLY ON HAND-HELD OR MOBILE DEVICES.