ARTICLE FOR THE FEAST OF THE TRANSFIGURATION

IN OUR modern world, communication and technology have become vital and essential – something which has become an integral part of our lives. Attempting to successfully embrace this, I have a laptop, an iPad and an iPhone and I must admit that I derive a great deal of pleasure from all three.

Yet the other day I had a shock when my phone rang. I had installed photos to my contacts so that I had a ‘visual’ when one of those contacts called me. On this particular occasion, I was horrified to see a grotesque parody of my younger daughter appear on the screen! But the reason for this was quite simple.

My younger son, the joker of the family, had ‘photo-boothed’ the picture of my daughter, effectively changing and distorting her features! Of course, I had no idea whatsoever that he’d done this…

In fact, due to today’s modern technology, it seems that many of us have become photographers, using digital cameras and mobile phones along with ‘selfie-sticks’.

However, I have often pondered about how wonderful it would have been if there had been cameras at the time Jesus lived among us! Can you imagine some of the wonderful images the disciples could have captured of our Lord?

On August 6th the Church celebrates the great feast of the Transfiguration of Jesus.

We are told that while his countenance was transfigured, Moses and Elijah appeared in his company, causing Peter to enthusiastically suggest making tents for all three of them.

I have no difficulty in imagining that if Peter had a camera at that time, he would have been snapping this amazing scene for all he was worth! 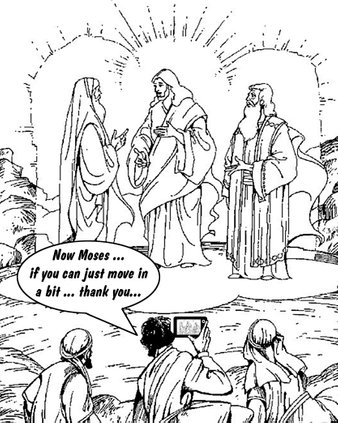 Today we are free to enjoy technology and photography to our hearts content. But in relation to the Lord, we have no need of a computer, digital camera or mobile phone.

And the reason for this is simple. If our enthusiasm is as great as Peter’s, we have no need of a ‘visual’ of the Lord. Why? Because we have the great gift of faith; and with the eyes of faith we know that the Lord is always beside us…

So let us see our faith through the lens of joy and know that due to his great love and grace our picture of the Lord can never be distorted. It is pure gift – strong, true and loving, like God himself.