How do you tune into the Lord? 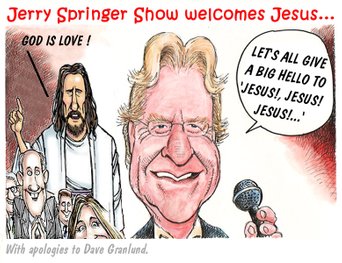 “JERRY! JERRY! JERRY!” my then seventeen year old son chanted, along with the TV studio audience. “JERRY!” He was, of course, watching the Jerry Springer show.

Television presenter, former lawyer, Democratic mayor of Cincinnati, news presenter, actor, and musician Jerry Springer remains well known for hosting his own chat show, which continues to be ever popular. In fact, the current trend of reality TV, docu-soaps and chat shows, command a huge proportion of air time on our televisions with soaring viewing figures. And there are so many of them.

You name it – and there’s been a programme about it, whether it’s the Armed Forces, cookery, hairdressing, MI5, sugar or survival, or the really well-known ‘big guns’ such as ‘Big Brother’ or ‘Keeping up with the Kardashians’. These days our screens seem to feature them all.

Yet what does ‘Reality TV’ really mean? The Internet, as ever, provides us with the answer. It says: ‘Reality television is a genre of television programming that documents supposedly unscripted real-life situations, and often features an otherwise unknown cast of individuals who are typically not professional actors.’

These types of television programmes usually feature a whole range of human emotions. And in our own daily living, these so-called ‘real-life situations’ are also funny, emotional, humdrum, upsetting or angry, but more importantly they can also involve love.

And without doubt, love makes the world go round. In fact a child first learns about love in the home. And where there is love, there is God – I’m sure most of us are familiar with the expression ‘God is love’

And where there is love, there is God – I’m sure most of us are familiar with the expression ‘God is love’ Our own personal realities involve our relationships with each other and with the Lord. And in these relationships our emotions are always engaged. But of course, the primary focus of Jesus’ reality was his Law of Love.

There are many distractions in our world today but there are two things which will endure forever – love and the Lord Jesus Christ.

Reality TV is cult entertainment for our time which we can tune into if we are so inclined. But we can be certain that Jesus Christ is the supreme reality for all time and he is readily available for us to ‘tune into’ whenever we want to.

If Jesus were to appear on our screens today as a chat show guest, would you follow my son’s example, but instead enthusiastically shout: “Jesus, Jesus, Jesus!”?