I'VE LOST COUNT of the number of fancy-dress costumes that I’ve made for my four adult children over the years, especially during the time that they were at school. The collection covers Victorian, Roman, characters from books, a cat and even a tree, and they fully entered into the spirit of each character with gusto.

Yet interestingly I've noticed that although children seem to derive great delight in donning a character costume, they are generally less than enthusiastic about wearing smart or formal attire for special occasions. I can vividly remember an incident of this nature, when my four youngsters were smartly dressed for a photographic studio session.

My younger son, who had complained and sulked in turns, disappeared at the last moment, only to re-appear having divested himself of his formal trousers and crisp shirt in favour of well-worn jeans and sloppy sweatshirt. Needless to say, he didn’t get away with it!

Most celebrations – whether they are wedding, birthday, anniversary, baptism and a whole range of others – customarily contain certain elements which we have come to associate with them, such as ceremony or rite, food and drink, music, guests, decorations, cake and speeches. And rightly so, as celebrations are joyful occasions. And all of us are familiar with the idea of wearing our best and smartest clothing in honour of one.

On First Communion Day the little girls traditionally wear white dresses, often with veils and the boys outfit consists of smart trousers, shirts, ties and sometimes jackets. And of course, they look fantastic. But remarkably, I don’t think I have yet heard one of these children complain about the initiative of having to ‘dress-up’ for this particular occasion. And it seems to me that God’s hand is at work in this.

But even on such a spirit-filled and moving occasion, there have often been moments of humour. For example, at one particular First Communion preparation session, the subject of the children’s special outfits was raised, with anxious mums posing questions. But the brilliant comment that stood out for me was from one of the girls who would be receiving her first Holy Communion:

“My dress is being made AS WE SPEAK!” she claimed. And on the great day itself, wardrobe malfunctions can – and do – occur. 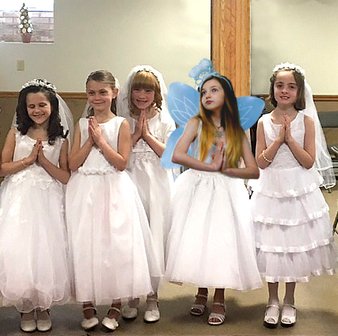 pins for drooping hems, lost buttons and broken zips. To say nothing of needing to carry a veritable hairdresser’s supply of hair grips and clips to secure veils and tiaras which simply won’t stay put. And the incidental extras can be troublesome too. I've noticed the most glorious dresses accessorised with little bags, gloves and on one occasion, even a parasol! Unfortunately, I've also become aware of the children becoming confused as to where they should put said ‘extras’ during the Mass, especially when the great moment of receiving their first ever Holy Communion arrives. In fact, one lovely little girl nearly strangled herself with the long handle of her little bag in her confusion and haste to do – and be – what was required of her!

JUST AS WE ARE

It is right and proper that we celebrate the wonderful gift of receiving the Lord’s Body and Blood for the first time. And on such a spiritual and meaningful celebration we should include all the traditional elements of this. We are rightly proud of our young people and we joyfully celebrate with them – the first time, and indeed every single time – both they and we, receive the Lord. Yet we are invited to the table of the Lord just as we are.

And part of the wonder of this great gift from God is that it is freely given to each one of us. And we are free to receive it, whether we are dressed in our best finery or in our oldest garments. All we need is faith. (ENDS – 649 words)

for more information or order from AMAZON or WATERSTONES online.