SOME TIME AGO, in a previous article, I mentioned my involvement in church care or cleaning, at my local parish church for one morning per week.

In fact my main task is vacuuming and I find it strangely soothing, relaxing and even spiritual, as it gives me a much needed opportunity for prayer and reflection. Yet the other week I was jolted out of my reverie by one of my co-volunteers. As she approached me, duster and polish in hand, I couldn’t help but notice that she was giggling. As I raised my eyebrows, she began to explain:

“We’re not supposed to polish the actual seats of the pews,” she said, “For health and safety reasons. It makes them too slippery. But I was just thinking that perhaps it might not be such a bad idea after all.”

“Really?” I queried, trying to work out where the conversation was going.

“Yes!” she continued. “The parishioners can slip straight off their seats and onto their knees to pray, without having to make any effort at all!”

It was hardly surprising that we both laughed at the silliness of the suggestion but I also made a mental note to repeat the joke to another friend later that day. Yet after this re-telling, I found myself seriously contemplating the ways in which we pray and the significance – if any – of these.

Prayer is extremely personal to each one of us as it is at the heart of our own relationship with Jesus Christ. Yet in the main we are able to recognise when others are praying by their actions and body language. Sitting or kneeling, hands pressed together palm to palm, clasped or held out palms uppermost, are the classically recognised positions

for prayer.neither simple nor straightforward.

And in fact, these physical positions are so 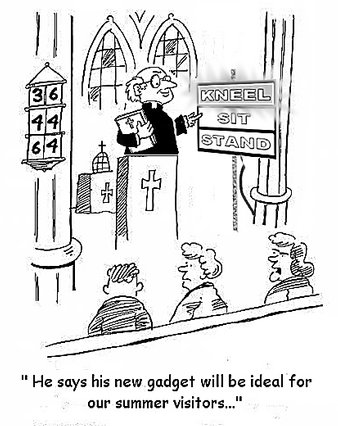 accepted as the norm, that I’ve even seen a few people become upset, when they’re unable to kneel to pray for medical reasons.

When we pray we use our minds and sometimes our lips but using our bodies in this way is also perfectly acceptable. Yet, of much greater import is the prayer which emanates from our hearts. God knows our innermost thoughts and desires anyway, regardless of what we choose to share with him in prayer. Yet prayer is truly vital to build and maintain a loving, lasting relationship with the Lord.