I always think that buying presents for people can be quite tricky. The questions of what to get – will they like it and will it fit? – are some of the most common worries which we encounter.

Yet we can receive such joy and satisfaction when we do get it right and the recipient is thrilled with their gift. Christmas, as we know, is the prime time of the year for carrying out this ritual and the December shopping crowds bear testimony to this.

Some years ago, when my adolescent son was indulging his latest mania for skateboarding, he begged his father and I to buy him a new skateboard for Christmas. We weren't averse to the idea and there was little doubt as to how thrilled he was to receive it.

To our surprise, he later he produced a video of himself and his friend performing their 'tricks' at the local skateboard park. As a family, we were enthusiastically invited to watch the wonders of 'Kickflips', 'Heelflips' and the mighty '900'. We settled down expectantly to watch, but it's fair to say that we were all stunned into silence by the fact that neither boy showed any aptitude whatsoever. In fact they were hopeless!

Eventually my daughter started to giggle and this, in turn, led to every one of us howling with laughter. Fortunately my son took all this in good part and has never been allowed to forget his skateboarding video to this day.

Gifts come in many ways, shapes and forms. There are those which we give to others, there are our own natural gifts and talents and there are the gifts of the Spirit. However, it's vital to remember that all gifts are important – whether they’re talents and abilities, material or spiritual ones. 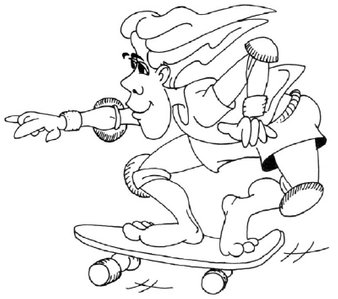 His skateboarding video wasn't such a

mighty feat ... despite his mighty feet !

When we receive a present, it means that someone has been thinking of us, which is a sign of love. If we are gifted in any other way, this is a special grace bestowed on us by the Lord.

In my son's case, he apparently had no special talent for skateboarding, but he treasured his Christmas present and made good use of it. In the same way, we should remember the great gift of our Lord Jesus Christ, who came to us at Christmas over two thousand years ago, in the most humble of ways. I pray that we too can make full use of this great gift.

St Therese of Lisieux believed that there is sanctity in doing ordinary things extraordinarily well. But for those of us who aren't perfectionists, maybe there's the same sanctity in just trying hard. Even at skateboarding... (ENDS: 455 words)