Article Christ the King 2016
BACK

Most toddlers and really young children develop a fondness for some object or another, whether it's a cuddly toy, comfort cloth or dummy. My four children were no exception to this. My eldest son was attached to his teddy bear and in my elder daughter's case, she loved her dummy. My twins were not immune to this either, but the objects of their affection were slightly unusual.

My son was passionate about sucking his thumb, a habit he developed from birth, but my daughter's favourite was – of all things – her duvet! She first fell in love with her cot duvet and cried when she progressed to a single bed and had to leave it behind. But not for long, as she then became passionate about her single duvet in its pretty pink and white cover.

Very quickly one thing led to another.

''Make up stories about Dooby-doo,'' I was implored, and so allowing my imagination free-rein, I did just that...

Dooby-doo was a princess who had a sister – the duvet on my other daughter's bed, and a father – the king-size duvet on our bed. Their Daddy was a king of course and he was called King Dubet, or 'King' for short. King reigned supreme and the cuddly toys, to say nothing of his duvet daughters, had to adhere to his rules. What King said, went...

In reality, kings, queens and members of the royal family are given the respect due to their status and are endowed with all the rich trappings of their position. On the feast of Christ the King, we remember our Lord and Saviour who is truly 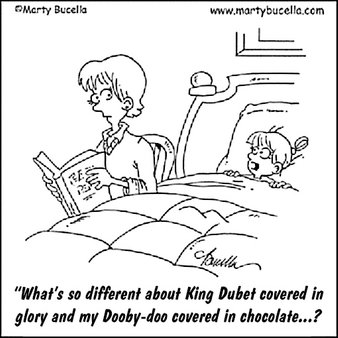 king of the universe. Yet Jesus Christ was also the ultimate king of paradoxes.

The word 'king' is usually associated with power and majesty, yet Jesus avoided all shows of earthly power and authority. Naturally we would expect a king to receive important people and dignitaries, but instead Jesus received the lowly, the rejected, the poor, the sick and the suffering.

And most poignantly of all, kings wear crowns, yet our Lord Jesus Christ was crucified wearing a crown of thorns. Yet there can be little doubt that those of us who follow the Way, the Truth and the Life, love Jesus Christ in all his humility. In common with the 'King' of our imaginative storytelling, Jesus reigns supreme. But his reign is one of gentleness, love and peace. And of course, he is no fantasy...