Our faith can combat that sinking feeling...

MY YOUNGER SON is something of a maverick. He has always been mischievous, unpredictable and a daredevil. In fact, to a certain extent, he still is! From a really young age his sense of adventure led him into all sorts of scrapes and gave his long-suffering parents more than their fair share of trials and tribulations.

When only a small toddler, he ran off in the grounds of a stately home and proceeded to totally immerse himself in the ornamental pond there. And of course, this was despite my repeated injunctions to go NOWHERE near the water!

Happily however, he was instantly fished out by yours truly, so his only hardship from that adventure was being soaked to the skin.

But it seemed that he never learnt…

A past holiday on the island of Kos rapidly became a nightmare for myself and my husband, when our son – then aged eight and as yet unable to swim – repeatedly threw himself into the deep end of the hotel pool. Completely undeterred by sinking like a stone and swallowing pints of chlorine-laced pool water, we had no choice but to jump in – often fully clothed – to rescue him from drowning! Although on a lighter note, his reputation rapidly spread and other swimmers soon became adept at rescuing him for us!

Despite the problems that water can occasionally bring, most of us know that it is a precious commodity: life-giving and life-saving. In fact without water we would simply cease to exist; it is at the very essence of our being. In fact we are largely made up of it and when we come into the world, it is in the birth waters.

Therefore it is hardly surprising that we baptise with water. In fact, we are reminded of our baptism every time we use the holy water and make the sign of the Cross in our churches. 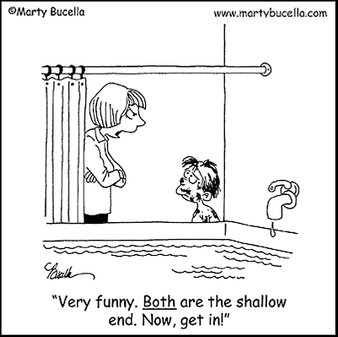 This month we celebrate the Baptism of our Lord, the One who chose to be baptised even though he had no need to do so, as he himself was the Christ. He was immersed in the waters of the Jordan by John the Baptist and as a result the Holy Spirit descended upon him in the form of a dove, and God the Father spoke the words of loving affirmation with which we are familiar.

The wonderful celebration of the Baptism of our Lord is a perfect opportunity for us not only to remember our Lord Jesus Christ, who was baptised to fulfil all righteousness, but also to reflect that we ourselves have been baptised into the life of Christ and the Church. Our baptism is precious, and so are we in the sight of God.

The only snag for me though, is that baptism by total immersion seems a wee bit scary. Can’t think why..! (ENDS - 488 words)